The Buzz About Endodontic Irrigation

There is lots of discussion about Endodontic irrigation.  The introduction of new technologies, such as Gentlewave, and the accompanying marketing associated with this product have increased the  attention to the importance of endodontic irrigation.  Many of you may remember the cliche you heard in dental school that if you properly clean the canal system, could could fill it with bird feces and it would be successful.  While we know that bird feces would reintroduce bacteria into the canals - the funny point of the saying was to stress how important the cleaning of the canals is to the success of endodontic treatment.

Just like endodontic shaping techniques, there are multiple endodontic irrigation solutions and delivery techniques.  Furthermore, there are myriads of combinations and concentrations of each of these irritants.  To make this further cloudy, a Cochrane Systemic Review of endodontic irrigants reports "Although root canal irrigants such as sodium hypochlorite and chlorhexidine appear to be effective at reducing bacterial cultures when compared to saline, most of the studies included in this review failed to adequately report these clinically important and potentially patient-relevant outcomes. There is currently insufficient reliable evidence showing the superiority of any one individual irrigant. The strength and reliability of the supporting evidence was variable".

For the purpose of the is article, we will consider NaOCl as the gold-standard, most used irrigant in the world and will avoid the discussion about concentration (although I prefer full strength).

Delivery of the NaOCl irrigation can be done several ways:

In our practice at Superstition Springs Endodontics, we have been using active irrigation for years, starting with ultrasonic and now currently using sonic activation on every case.  We have found that with adequate irrigation time, sonic activation and removal of the smear layer (using EDTA), we are finding and filling more and more lateral canals, accessory canals, apical deltas.  (The use of radiopaque sealers also increases the visibility) In my opinion, its difficult to say how much of this is attributed to the removal of the smear layer - but I expect that it is a combination of the active irrigation and removal of smear layer.

Here are a few of the cases demonstrating the benefits of active, sonic irrigation and smear layer removal. 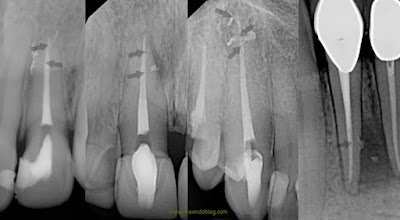 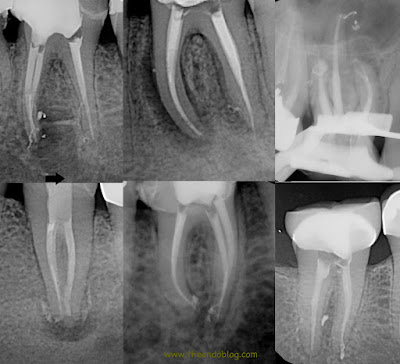 So as you can see, the proper cleaning, shaping, active irrigation and removal of smear layer of the canals allows for us to open the lateral, accessory and apical deltas that we know exist in the complex canal anatomy.

Whether this changes the outcomes or success rate of the endodontic procedure is unknown, but it sure looks pretty!


Related Articles:
Passive ultrasonic irrigation in root canal: systematic review and meta-analysis.
Endodontic irrigants: Different methods to improve efficacy and related problems
Effectiveness of ultrasonically activated irrigation on root canal disinfection: a systematic review of in vitro studies.
The Use of Lasers in Disinfection and Cleanliness of Root Canals: a Review