Research Update: Use of MTA for Direct Pulp Capping

In a recent post, we have discussed the use of MTA as a pulp capping agent.

A recent article by Yasuda, Ogawa, Arakawa, Kadowaki and Saito entitled "The Effect of Mineral Trioxide Aggregate on the Mineralization Ability of Rat Dental Pulp Cells: An In Vitro Study" may shed some light on the reasons MTA may be more effective than calcium hydroxide for direct pulp capping.

Direct pulp capping is an effort to maintain the vitality of a dental pulp following exposure during excavation and thereby avoid endodontic therapy. The formation of a dentinal bridge over the exposed pulp surface is the goal while maintaining pulpal vitality.

Conventional pulp capping treatment included medicating the exposed pulp with calcium hydroxide (ie. Dycal) prior to restoration. Calcium hydroxide is known to cause an inflammatory reaction of the dental pulp. Appication of adhesive resins has also been attempted. Incomplete dentinal bridges has been found with a lack of published long term clinical results.

It has been reported that MTA induces the formation of dentinal bridging with little or no inflammation. MTA is known for it's biocompatibility and lack of cytotoxicity. Tani-Ishii et. al. reported that MTA upregulated the expression of type I collagen and osteocalcin in osteoblasts.

Bone morphogenic proteins (BMP's) are crucial to bone and collagen formation. BMP-2 and it's receptor are expressed in the dental pulp. BMP-2 has been shown to accelerate the differentiation of human pulp cells into odontoblasts. This study hypothesized that BMP-2 is involved in the MTA induced mineralization.

Preventing Coronal Leakage in A Pediatric Patient After Endodontic Treatment 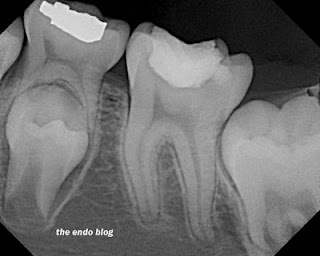 This 10 year old patient had a carious pulp exposure on tooth #19. The tooth was diagnosed with a reversible pulpitis and normal periapex. Upon excavation, a carious pulpal exposure occurred. With root developement completed and a cooperative patient, endodontic treatment was completed.
In a case like this, knowing that she will not have a permanent crown for about 8 more years, I become concerned about preventing coronal leakage. In an effort to create another barrier to prevent coronal leakage, I use MTA to seal the canal orifaces. 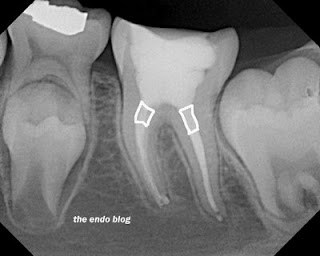 MTA (Mineral Trioxide Aggregate) is placed into the canal oriface. The MTA will provide a better coronal seal than a bonded restoration alone. The gray color of the MTA makes it easy to remove if the GP ever needs to place a post. Patient's parents are informed of the risk of coronal leakage during the adolescent years and proper preventive care is encouraged to protect the investment made in the tooth. 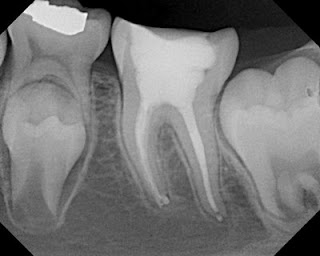 Patient is referred back to general dentist for comprehensive care. This may include a provisional type crown which will be monitored closely over time.
Posted by The Endo Blog at 11:17 AM 4 comments: