As clinician readers know, the canal anatomy of teeth is rarely simple. Lateral portal of exits (lateral canals) are a significant challenge to clean and are present in many of the teeth we see for root canal therapy. In a previous post, I discussed the use supplemental irrigation and ultrasonic instrumentation to clean isthmus tissue. That post can be found here: http://www.theendoblog.com/2012/07/the-isthmus.html I use these same techniques to address lateral portal of exits. These lateral exits are very common, but with proper irrigation, they can be predictably addressed.

Sometimes, as in this #19 below, the exit can be found at the apex in the form of a sharp distal turn or delta. Direct instrumentation may or may not be possible with small, pre-bent files (6 or 8). 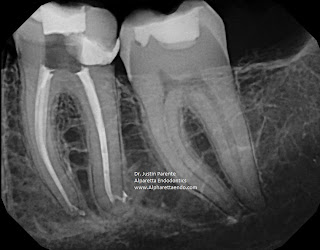 These exits can also be found in the furcation region. If untreated and contaminated with bacteria, they can feed furcation radiolucencies and cause attachment loss (probing). Here is a straightforward #30. 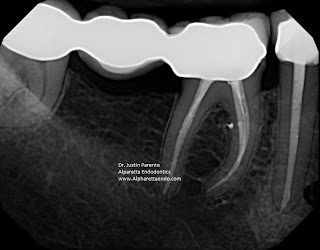 Untreated, you will see radiolucencies centered on the exit as in this #9 retreated below. I measured to the depth of the lateral canal and focused my irrigation and irrigant activation at that level. 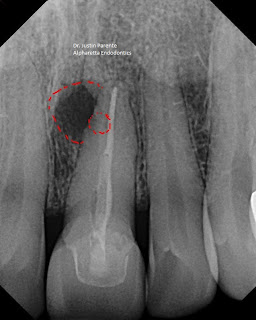 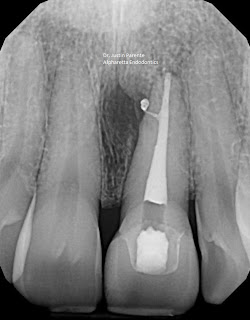 Always be aware that the potential for more anatomy exits. With this #28, I found 3 canals splitting at midroot and thought I had found all the anatomy. Fortunately, extensive irrigant activation picked up a lateral exit off the mesial buccal canal in the apical third. Tooth #29 is scheduled for retreatment. 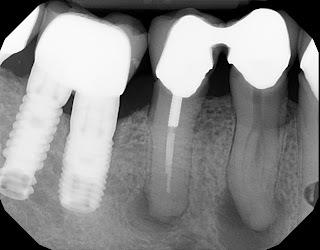 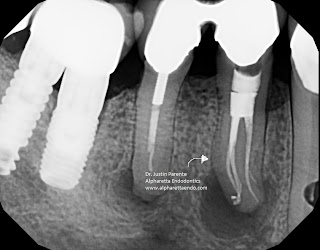 In summary, do not believe for a second that sticking a file in a canal completely cleans a canal system.
Merry Christmas!
Justin Parente
Alpharetta Endodontics
www.Alpharettaendo.com
www.facebook.com/alpharettaendo
﻿
﻿
Posted by Justin M. Parente, DMD at 7:39 AM 2 comments:

Why Is It Better to Save a Natural Tooth? 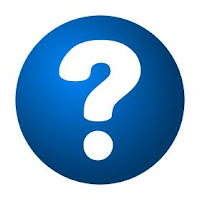 I'm a healthy 47 year old male. My upper central incisor (#9) was struck (trauma). It cracked vertically to the gum line, and then cracked horizontally to the lateral edge (resulting in an inverted "L" shaped fracture).

My general dentist first tried applying a layer of bonding, which appeared to be acceptable both aestetically and structurally.

6 weeks later, severe pain started to develop. I went back to my dentists and he said that there is no sign of infection, but that the pain is likely from the nerve dying. We agreed that we should go with either a root canal + crown, or implant + crown.

As a mechanical engineer, I'm leaning towards the implant, because it seems more "fool proof", especially considering that the existing tooth has been structurally compromised down to the gumline.

But the one thing that still has me second-guessing the implant option is that endodontists and periodontists both seem to universally agree that "It's better to save the tooth whenever possible."

Why is it "better to save the natural tooth" if it is subject to future decay (in particular at the base of the crown) and is also subject to brittleness following the root canal?

As a mechanical engineer, I like the prospect of an inert metal or zirconium implant that is not subject to these potential future modes of failure.

Please share your insights in the context specific to my situation described above. Much appreciated. Thank you.

While it may seem a simple solution to replace a tooth with an implant and then avoid future issues like decay or root fracture, there are some important reasons why the specialists are recommending preserving the natural tooth if possible.

Teeth and implants are not the same. The main difference between a tooth and an implant is that a tooth has a periodontal ligament. This ligament attaches the root to the bone and acts as a shock absorber for the tooth.  Without a periodontal ligament, when you touch, tap or chew on the tooth, you cannot feel the tooth or how hard you are biting.

The periodontal ligament has an important role with esthetics.  When the ligament is removed, and bone loss naturally occurs, gingival recession follows. This can change the esthetics of the tooth, especially in the anterior esthetic area.

The periodontal ligament also has an immunological purpose. The ligament and the gingival connective tissue fibers form a barrier to protect the bone from bacterial invasion.

There are times when the natural tooth cannot be saved.  If the root is fractured, then the tooth is not savable.  The endodontist is the most qualified specialist to determine if a root is fractured.  At Superstition Spring Endodontics, we use microscopes and focused field, high resolution CT scans to aid in the diagnosis of root fracture.


In these particular cases, a dental implant may be the ideal way to replace a missing tooth.  Marketing of dental implants by manufacturers has made this treatment options well known to the public, however, dental implants are not free of complications or need for revision (additional) treatment over time. By understanding the complications that can occur with implants, it will help to understand why specialists recommend, "saving the tooth if possible".

The periodontal ligament is the shock absorber for your tooth.  Can you imagine driving a car without shocks? An implant, without a ligament, has no proprioception (sense of feeling). This means it is difficult for you to "feel" how hard the teeth are hitting together. Porcelain chipping, cracking and loosening of implant screws are all common complications with implants, mostly due to the lack of a periodontal ligament and the proprioception it provides.

Fortunately, with implants adjacent to natural teeth, you maintain proprioception from the adjacent natural teeth so your chewing can still feel the same. However, it is difficult to feel if the implant crown is hitting too hard, like you would with a natural tooth. Your dentist must be careful to get the implant crown adjusted just right, and will often times flatten the crown to prevent excessive force on the implant or make the biting contact light.

Loss of bone around an implant can cause unsightly changes in the anterior esthetic zone. While the implant may be functioning, esthetic failure is a well known complication with anterior implants.

Peri-implantitis is the growth of bacterial biofilms on the implant surface, causing chronic inflammation leading to bone loss.  Many people are not aware that an implant can get peri-implantitis, just like a tooth can get periodontitis, both of which can eventually lead to the loss of the implant/tooth.   The periodontal ligament plays an important role in the preservation of the bone around a tooth.

Historically, implants have been classified as "surviving" or "failed" based upon mobility of the implant. New implant studies have suggested that implant intervention may need to be done at earlier stages before too much bone loss has occurred.  It was proposed that surgical intervention may need to be done when an implant is considered "ailing" or "failing" rather than waiting until enough bone loss has occurred to consider it "failed".

In a recent study published in the Journal of Oral and Maxillofacial Implants, a comparative study between the success rates of implants and root canals revealed no significant difference in the two options and emphasized that treatment decisions should be made on factors other than outcomes.  In other words, neither of these treatment options can claim to be more successful than the other.  These treatments are different, and each has its own pro's and con's.

Implants have an important role in dentistry.  I routinely recommend implant placement for missing teeth or teeth that are too damaged to save. However, implants are not teeth and we should try to preserve our natural teeth if possible.

For more information on the longevity of implants vs. natural teeth, click here or here.