The Good, The Bad & The Ugly - now available for CE Credits on DentalTown

In case you missed this Inner Space Seminar presented at Superstition Springs Endodontics, it is now available on DentalTown. 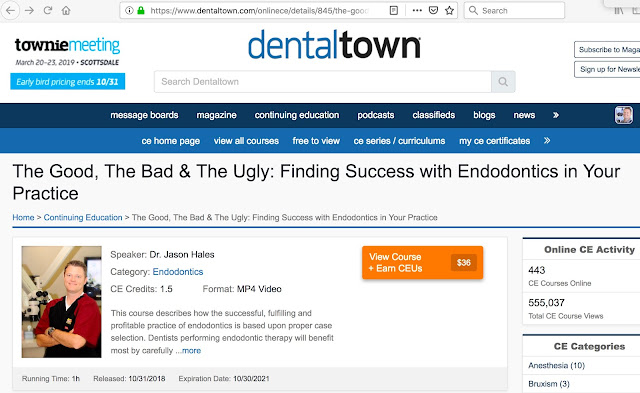 Posted by The Endo Blog at 4:38 PM No comments:

What's the Deal With GentleWave?

We have been asked by many dentists regarding our thoughts on a new irrigating technology called GentleWave by Sonendo Inc.  After meeting with the GentleWave representatives, an in-office demonstration, performing the procedure on extracted teeth, discussing with colleagues using the product and critically reviewing the clinical research  on this technology, we are prepared to answer the question so many of you have asked, "What's the deal with GentleWave?"

At SSE, we have been early adopters of many new, and lasting technologies in endodontics such as microscopes and CBCT.  Our process in adapting a new technology, like GentleWave, is to carefully evaluate the technology, including the claims made by the manufacturers and a critical evaluation of whether the published evidence supports those claims.

It is also important to evaluate the financial side of any large investment to make sure that it is a fiscally sound decision that makes sense for our patients  and our practice.  Failure to do so leaves a practice in a position where a financial commitment to a technology then determines how the technology is applied to the patient's care.

In the #1 bestselling book, Good to Great by Jim Collins, he makes a point about  our "cultural obsession with technology and technological-driven change". Nowhere can you find a group of professionals more obsessed with technology than in dentistry!
However, in Collins extensive study of what made good companies become lasting, great companies, he noted that the great companies "maintained a balanced perspective on technology, while most companies become reactionary, lurching and running about like Chicken Little..."  Collins finds that technology alone is never a primary cause of either greatness or decline.

If you are following the information that the GentleWave manufacturer is delivering to offices throughout the greater Phoenix area it is obvious they are making a sizable marketing investment. With a clever marketing approach, they have included in the purchase price of the system, a marketing budget to promote the system and the practice who has invested in it.  You have likely received several invitations to CE events promoting the technology.  There are several phrases being used by the sales-force to excite dentists about GentleWave such as "the thrill of the fill", "this is the new standard of care",  "anatomy like never before seen" and "becoming part of the club". There appears  be an effort by the manufacturers and early adopters to create an impression that the evidence is in and this technique is proven to be superior to conventional irrigation methods.  If you are not adopting the technology now, you will be left behind...

A short summary of our decision regarding the GentleWave procedure as to why we have decided not invest in the technology yet because it will cost patients more, increase treatment time, and decrease our productivity without clinical evidence of improved outcomes was posted on the blog several months ago. We will continue to watch the technology, its improvement and evaluate  the evidence published over time.

The following sections provide more detail into our evaluation regarding the claims made by GentleWave.

What Does the Research Say About GentleWave?

The initial clinical study which made claims of 97% success rates, improved cleaning of canals, isthmuses &  lateral canals & improved cleaning had some major design flaws and biases. Design bias, attrition bias, selection & sampling bias and sponsorship bias were all evident in this study, including a failure to include proper positive and negative controls.
The second clinical study improved upon many of major design flaws & biases of the first study, yet again failed to include positive and negative controls.
Failure to include controls in the clinical studies is concerning to us.  This failure in study design, is hard to comprehend, unless a direct comparison with conventional techniques was not desired or conventional techniques were equally effective.  We have also asked why there has not yet been a double blind, randomized, controlled study performed?

Why have the universities and residency programs not published about the Gentlewave technique? After discussing this with several people involved at that level, the  reason appears to be that if a university accepts any financial support from the company, including providing the unit, the company insists on controlling the publication of any research results.

So while we can understand the company's desire to protect its significant investment in the development of it's technology, their scientific research appears designed as a marketing tool to support manufacturer claims.  A properly designed study, (randomized, double blinded study with proper controls) will go a long way to overcome sponsorship bias that up to now has been evident in the research.  In fact we have not been able to find one study where the authors are not directly tied to and supported by Sonendo.  We will continue to watch  for this evidence and keep you updated.

One of the biggest claims made regarding the GentleWave technique is "improved removal of organic matter" and creating a "higher standard of clean". Evidence provided for this claim are usually images of more complex anatomy picked up when the tooth is obturated. The advocates call this "the thrill of the fill".
However, the idea of cleaning and filling lateral canals and isthmuses is not unique to GentleWave.  In our practice we have used both ultrasonic and sonic activation of irrigating solutions which has provided 3D cleaning and shaping of complex canal anatomy.

In the end, we need to be honest with ourselves. How many teeth are really returning to our office as failures because we didn't clean the tooth well enough?  From our experience - very few.  When patients return to our office with a non-healing root canal procedure, typically it is because the tooth is fractured, not because it wasn't clean. We would love to add the Gentlewave technology to our office but first we need to see a tangible benefit to our patients. That day may come, but for now we would like to see more evidence than "because the company says it's better", before we invest in this technology.
Posted by Unknown at 1:05 PM No comments:

Email ThisBlogThis!Share to TwitterShare to FacebookShare to Pinterest
Labels: GentleWave

Sometimes we are quick to assume a tooth is fractured when we see lateral bone loss.  But that radiographic finding alone isn't enough to make that determination.  If you cannot visualize a fractured, and the tooth is diagnosed as a necrotic pulp, it doesn't matter how big the lucency is, it can and should be given the opportunity to heal.  Proper diagnosis to determine vitality is the most important test for the prognosis of this tooth.  In this case, with definite necrotic pulps on #26 and #27 and no periodontal defects, endodontic therapy is recommended.

Sometimes we are quick to assume a tooth is fractured when we see lateral bone loss.  But that alone isn't always enough to make that determination.  Even with CBCT available, I tell my patients the only way to be 100% of a vertical root fracture is to see it.

Finding the Right People for Your Practice

CONCEPT:  If you have the right people on the bus, the problem of how to motivate and manage people largely goes away.  With the right people, you can take the bus anywhere it needs to go.

CONCEPT:  Great companies have rigorous – not ruthless – cultures. A rigorous culture means consistently applying exacting standards at all times and at all levels – especially in upper management.  The only way to deliver to the people who are achieving is to not burden them with the people who are not achieving.
·     To let people languish in uncertainty for months/years, stealing precious time in their lives that they could use to move on to something else, when knowing that they are not going to make it – that is ruthless
·     To deal with it right up front and let people get on with their lives – that is rigorous

CONCEPT: Practical disciplines for being rigorous – not ruthless
1.    When in doubt, don’t hire – keep looking.  The ultimate throttle on growth is not markets, technology, competition or products. It is the ability to get and keep enough of the right people.
2.    When you know you need to make a people change, ACT.  The right people don’t need to be managed.  Guided – Yes, Taught – Yes, Lead – Yes, - but not tightly managed.
a.    Great leaders don’t rush to judgment. They invest substantial effort in making sure they have someone in the right seat before concluding  they have the wrong person on the bus.  Instead of firing honest and able people who are not performing well, it is important to try to move them once or even two or three times to other positions where they might blossom.
3.    Put your best people on your biggest opportunities, not your biggest problems. Managing problems can only make you good whereas building your opportunities is the only way to become great.