Occasionally, we see cases that have had previous treatment, retreatment, and apicoectomy, often times many decades ago, and now require intervention.  The prognosis on these cases is often guarded at best, and it is great that we have dental implants as an option.  If a tooth has a fractured root or is in poor restorative or periodontal condition, I generally recommend a dental implant.

However, there are some select cases, and select patients, where there are some alternatives.  I have a few such cases where I have elected to retreat a case with previous apicoectomy, and have had success without redoing the apicoectomy.  This is usually necessary where the entire canal system or chamber is contaminated, or there are missed canals that can be addressed.  In fact, a missed canals, or a leaking restoration are the most common reasons for apicoectomy failure.  I will save those cases for a future post, and instead show a couple cases where it was decided to "re-apico" the tooth.

This first patient suffered a traumatic sports injury 30 years ago to her anterior teeth.  The original root canal treatment was done at that time.  The teeth had apicoectomies within a few years.  The crowns on the teeth were recently redone, and a sinus tract was noticed soon after.  As an aside, the appearance of apical pathology on a previously treated tooth only following a new restoration is a common trend.  The most likely explanation is a lack of proper isolation during restorative care and a lack of seal in an old root canal treatment.

There was heavy amalgam tatooing of the buccal mucosa, but the patient was happy with the esthetics of her new crowns after many years of having crowns she considered ugly.  I discussed treatment options at length, and ultimately referred her to a periodontist for implant consult and to learn about the alternative treatment.  After discussing the option of implants with her periodontist, she came back to me to take a chance on redoing the apicoectomy.  The sinus tract was only associated with #9, but upon access, a granuloma perforating the B plate of #8 was noted, and a decision was made to treat both teeth.

The 6 month recall will be coming up soon.

Case Two is similar and more recent.  This was an extremely challenging case.
This patient presented with two sinus tracts, each tracing to #9 and #10.  The crowns on 8-9 and 10 were all recently redone within the past three months.  The post on #9 is out the end, and crown to root ratio is poor.  I recommended ideally extracting #9.  A case could be made to retreat #10, and that would be my usual preference.  The patient understandably was averse to extracting #9, and so an alternate plan of apicoectomy of both #9 and #10 was suggested.  Tooth #9 was already splinted to #8, so mobility is unlikely.  I likened the desired final result to a cantilever bridge, with a little bit of support.  I cautioned the patient that the prognosis was guarded at best, and the patient again wished to proceed with treatment.


I was very pleased with the final result of this case.  Only time will tell if we can have sustained success.  I'll be recalling this case is the coming months.

These two cases turned out as well as I could have expected, but I always appreciate any feedback. I always have more to learn about endodontic surgery, since my preferred approach is retreatment for an overwhelming majority of cases, and I don't have some of the experience in surgery that some other clinicians have.  If you would have selected a different flap design, let me know! I'm open to suggestions.

Both cases posted here could certainly have been treatment planned as dental implants.  However, both patients were in the unique situation of very recently having invested in new crowns.  With careful patient selection and expectation management, I believe we can offer patients these types of treatments to preserve their natural teeth, even if for only for a few more years.

Root Canal Treatment Can Save Teeth with Cracks

The following case is an example of the successful root canal treatment of a cracked tooth. Tooth #19 was diagnosed as necrotic pulp with acute apical abscess. RCT was recommended to save the tooth.
There was a large 10mm buccal probing depth, however, since the tooth was diagnosed as necrotic, this deep pocket is assumed to be endodontic rather than a true perio defect.
During treatment, a crack is found on the distal under the resin. Using a microscope, the extent of the crack is evaluated. In this particular case, the crack extended to the level of the pulpal floor. This is an important part of the evaluation of a crack, and in my opinion, can really only be done with a microscope. A crack that goes into the furcation or down into the attachment below has a poorer prognosis. Pt is informed the the crack and the potential effect on the long term prognosis of the tooth. Pt is given the choice to continue RCT and save the tooth or extract. 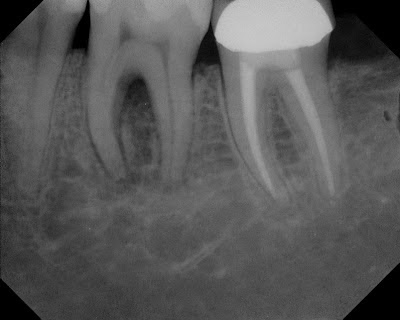 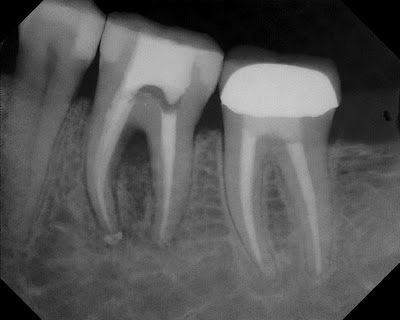 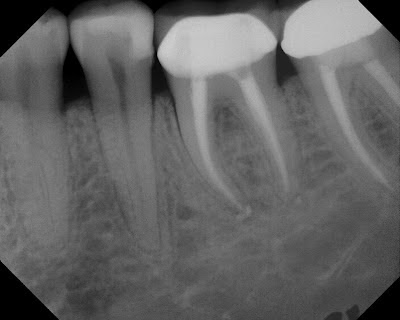 1 Year Recall
Bone has healed completely, tooth is fully functional and asymptomatic. This is successful endodontic therapy on a tooth with a crack above the crestal bone.
For more information regarding managing a teeth with a cracks, click here.
Posted by The Endo Blog at 9:46 PM 6 comments: