A recent study by Givol, Rosen, Taicher & Tsesis, published in the Journal of Endodontics, points out some interesting facts about malpractice claims in endodontics.

Errrors found and analyzed were categorized as pre-operative, intra-operative or post-operative.

Most of the errors occurred in the intraoperative phase of treatment. These included access preparation, detection of canals, instrumentation or filling.

Swelling & pain as the only complaint were reported in 100 cases and none of them were considered "justified" complaints. Swelling and pain are considered a side effect of treatment and not a complication. Patients should be informed of this possible side effect during informed consent. It has been reported by Tsesis et. al. that pain and swelling can occur following endodontic treatment in 1.5% - 20% of cases. Helping patients understand this possible side effect can help prevent misunderstanding and hopefully prevent unnecessary malpractice claims.

The lack of adherence to strict treatment protocols resulting in poor quality treatment was a common cause of malpractice claims.

Why All the "Buzz"? Cone Beam Imaging

Dr. Dale A. Miles DDS, MS, a diplomate of the American Board of Oral and Maxillofacial Radiology will be presenting the upcoming Inner Space Seminar entitled, "Why All the "Buzz"? Cone Beam Imaging. At Superstition Springs Endodontics, we feel it is the role of specialists, not manufacturers, to educate the dental community. With all the new information regarding 3D imaging, and the barrage of marketing to go with it, we have invited a specialist in radiology to come and share his expertise and experience with cone beam imaging. 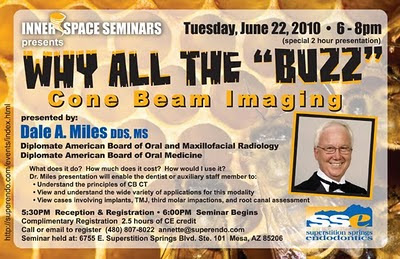