GentleWave by Sonendo: A First Look 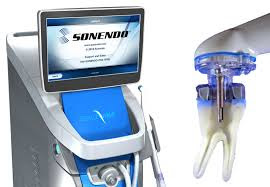 We have had some recent questions about a new technology for cleaning and disinfecting the root canal system that is being heavily marketed in the dental community.  This system, known as the GentleWave System, by Sonendo Inc. (Laguna Hills, CA), consists of a console that is used to deliver the traditional irrigating solutions through a proprietary treatment instrument (TI).  The tooth is accessed, canals are located, patency established and canals shaped to #20 .07 taper, the TI is sealed to the access of the tooth.  The console then systematically delivers the irrigating solutions through the tip of the TI.  Through the TI, irrigating solutions are delivered in a "degassed" state (no air bubbles) using acoustic  and hydrodynamic cavitation.  The solutions are simultaneously removed using built-in vented suction through the same TI.

While Sonendo Inc. has been around for close to 10 years, this company has made a significant investment into the marketing of this product.  The clinical claims made by the company include:
Like many new technologies and materials that are introduced in dentistry, much of the research supporting the new technology or product comes from the manufacturer or studies that are supported by the manufacturer.  It is well known that studies supported by a manufacturer tend to have bias that favors the funding source known as funding bias.   As clinicians, it is up to us to evaluate the research that is presented to us as we make important decisions.

A recent study titled, "12-Month Healing Rates After Endodontic Therapy Using the Novel GentleWave System: A Prospective Multicenter Clinical Study" by Sigurdsson et. al. published in the Journal of Endodontics, July 2016 is a perfect example of this problem. (click here to see the study)

The study concludes, "...the GentleWave System showed a high level of success after 12-month follow-up".   The abstract states, "The cumulative success of endodontic therapy was 97.3%.  The success rates of necrotic and irreversible pulpits were 92.9% and 98.4% respectively".  The failures in design of this cohort, uncontrolled study, make these numbers less impressive than they sound.

The problem with the study design is:
The problems that we find in the discussion include:
So a closer review of this study shows that the study design has major flaws and multiple unidentified and unreported biases.  These biases are then ignored and assumptions are made regarding superior cleaning of the new technology.

Obviously, the GentleWave procedure can be an effective alternative technique for irrigation and cleaning of the canals.  It does not provide evidence that the GentleWave procedure is superior over conventional endodontic therapy.  The series of case reports and in vitro studies available on the Sonendo website are a good beginning to provide evidence to support the claims made by the manufacturer (click here), but there is not evidence of superiority over conventional endodontic treatment at this point.

In order to substantiate the claims being made by the manufacturer, we need randomized, double-blinded, controlled clinical trials focusing on necrotic teeth.  With this kind of data, we would be able to better evaluate the effectiveness of the GentleWave procedure over conventional endodontic therapy.

In our practice at SSE, we are committed to providing the highest levels of endodontic care.  If any technology can demonstrate a significant improvement over conventional approach with serious randomized, controlled studies, rather than cohort  studies, case reports and in vitro studies, we will be interested in incorporating that technology.  We look forward to learning more about the GentleWave procedure in an upcoming office demonstration. We will also be watching for better scientific evidence to be published and will do our best to keep you up to date with our findings.