The Evolution of Implant Success 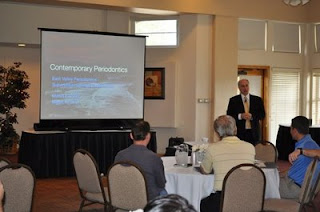 The 7th Annual Spring into Dentistry seminar was held on March 6th, 2009 in Mesa, AZ. The guest lecturer was Dr. Robert London of Seattle, Washington. Dr. London is currently a clinical professor and director of graduate periodontics at the University of Washington. Prior to his work at UW, Dr. London was director of graduate periodontics at NOVA Southeastern and at University of Southern California.
Dr. London's presentation was entitled, "Enhancing Dental Outcomes".
While a good portion of his presentation had to do with implant treatment planning and preparation of implant sites, he made some comments that I found fascinating. 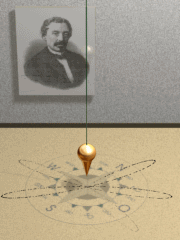 He used an analogy of a pendulum to describe the acceptance of dental implants into mainstream dentistry. Early on, there was some resistance to accepting them into everyday practice. Like the swinging of a pendulum, treatment with dental implants then became the solution to every situation. Now that the pendulum has swung to both extremes, we are now hopefully settling somewhere in the middle.

He also discussed the changing definition of success with implants. Early on, successful implant therapy meant osseointegration. If the implant was not loose, it was considered a success. In endodontics, success has always been defined very strictly as the complete resolution of signs and symptoms and complete healing of bone. With two such different definitions of success, it is no wonder that there has been misinterpretation regarding the treatment outcomes of the two different treatments.

Dr. London pointed out that what was once considered a successful implant (osseointegration alone) may no longer be an acceptable treatment outcome. Successful implant therapy now requires getting the implant to integrate in the right position, where it can support a prosthesis and look like a natural tooth. This is a major difference from simple osseointegration.

Dr. London stressed how important it was to have an interdisciplinary approach to dental treatment so all specialties are included in the best treatment approach for each patient.

We were pleased to have Dr. London come and share some of his expertise regarding periodontal bone grafting and implant treatment. We hope that the balanced approach to endodontics and implants which he described continues to gain momentum.
Posted by The Endo Blog at 8:00 AM

I have been using dental implant advertising with mixed success. I wanted to attend the conference, too, but was unable to make it to Mesa. Thanks for posting an overview of this lecture.

As a perio who has published on the implant/endo issue, I've seen things from both sides. While there are definitely those who extract too quickly, I've seen some endo's that want to hear nothing about implants. I've been hearing the success vs. survival argument for a while in endo circles and I have to say that it's unfortunate. Implant success has had strict criteria (similar to those in the endo world) since the late 80's. All the implant studies that you hear about use these criteria. Perhaps 5% of implant "studies" (typically ones in oversized throw-away magazines) use pure survival as their criteria.

As I said, no question that some teeth get extracted too soon but this success/survival thing isn't the best argument to take.

Thank you IP for your comments. One purpose of this blog is to have discussion. I appreciate the periodontal viewpoint. I think part of the problem between endo and implants is a lack of discussion. I think the endodontic viewpoint is often overlooked.
I used "Evolution of Implant Success" as a title because of Dr. London's remarks. He specifically mentioned that what was once considered a successful implant is no longer considered acceptable. Simple osseo-integration is not enough.
We are all trying to sift through the marketing that is presented to us as scientific research. Unfortunately, many of the companies that are marketing these products are also sponsoring and putting on the education.
I appreciate your thoughts.
I hope the pendulum has swung back to a happy medium!
Thank you very much.

Thanks for the response Jason.

I'd agree with Dr. London's comments... if this were 1986. At that time, simple implant survival was considered a success. Like I said, all the implant studies that we refer to within the past 20 years are based on strict criteria that are not based on "Is it still in the mouth?" It is based on absence of bone loss, gingival esthetics, prosthetic success, lack of mobility, etc.

Basing an argument against the decision to go with implants using Dr. London's statements is faulty.

All IMHO of course, and it's great that the topic is being discussed.