I realize that my last post was a little short. It was meant for the reader to contrast two root canal treatments on maxillary second molars and draw conclusions about differences. The obvious, and most important difference, is the treatment of 4 canals in the first case.
Here is the preoperative radiograph again: 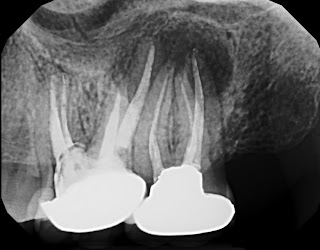 History: This patient has had symptoms on and off in the upper left for six years. She cannot chew comfortably on this side and feels a constant pressure in the area. She cannot walk up stairs without feeling dull pain in the area. The original treatment on #14 was performed in 2006 or 2007. Tooth #14 was then retreated by an endodontist in 2009, followed by persistent symptoms, and then treatment of tooth #15 soon after. With retreatment of #14 and treatment of #15, her symptoms improved for a short time, but soon returned.
Med History: Non-contributory.
Extraoral Exam: Alert/responsive, no extraoral swelling, significant asymmetry, or lymphadenopathy.
Intraoral Exam: All tissues normal in color and consistency, no swelling, no sinus tract, crown margins in tact. Large porcelain fracture on the occlusal of #15. All probing depths were 2-3mm with minimal signs of gingival inflammation.
Diagnostic tests: Tooth #15 was responded with a mild tenderness to percussion, both tooth #14 and tooth #15 were sore upon selective bite forces.
Radiographic Exam: Large radiolucency centered on #15 but overlapping the distal of #14. Widened PDL mesial #14. 3 canals obturated #15. Large, possibly strip perforated, canal preparation in the middle and cervical third of both #14 and #15, possibly compromising root strength.
The patient understandably harbored a very negative opinion of the success rate of root canal therapy. When patients harbor this attitude, treatment planning long, challenging retreatments with less than perfect success rates is usually out of the question. I recommended extraction of tooth #15, especially since saving the tooth would also require the investment of a new crown. I offered the alternative of a CBCT evaluation to aid in treatment planning any approach to saving the tooth. The patient understood my concerns, and opted for the CBCT. Here are some selected images from the CBCT. 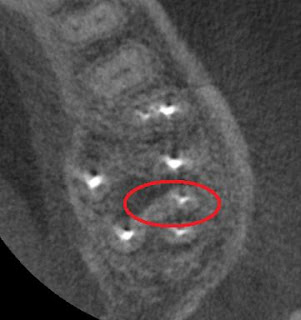 Circled is the MB root in cross section. From this view, it becomes apparent there is untreated canal anatomy in the form of a MB2 canal.
Even still, having looked through the CBCT images, I recommended extraction as the most predictable course due to the size of the lesion and the compromised tooth structure. The painted a pretty grim picture, but the patient asked me to take a chance on tooth #15 and consented to a guarded prognosis.
Upon access of #15, I was greeted with this view: 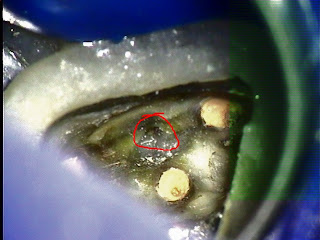 Circled is the site of the untreated MB2 canal.
Following 2 hours of uninterrupted work at the first visit, where I had to fight to unledge all 3 previously treated canals, and was ultimately unsuccessful with the distal, calcium hydroxide was placed. The MB2 canal, while easy to see with the microscope, still consumed a majority of the time to navigate. The patient reported all symptoms resolved immediately following return of sensation, an unexpected result. She was able to run up stairs without pain that same night.
Here is the final obturation: 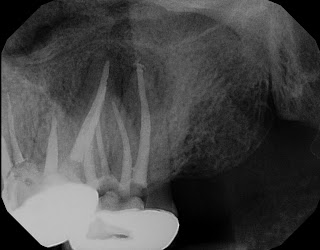 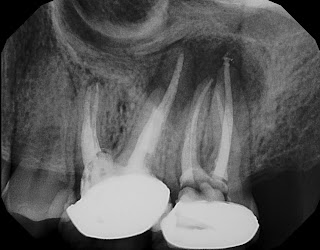 As you can see, still short on the distal where it was ledged. Some of the previous obturation in the palatal was unfortunately extruded. MTA was placed as a coronal seal in the cervical third and across the pulpal floor. Unknown to me at the time, she contacted her previous endodontist (in another city), who she still has a good relationship with to inform him of the outcome. She said he didn't believe there was another canal in #15 and will likely be requesting CBCT and clinical images...I haven't heard from him yet though.
It is unfortunate that so many patients I see have had unsuccessful experiences with dentistry and root canal therapy leading to negative opinions of the treatment options and profession. These patients are in our office literally every day, asking why? why? why? Here is another case of failure that required a consult lasting an hour and half to help the patient understand her condition, the etiology, and the treatment options (not many in this situation unfortunately). Having invested significant time and money in her teeth without success, it was challenging (understatement) to earn her trust in my diagnosis and plan. 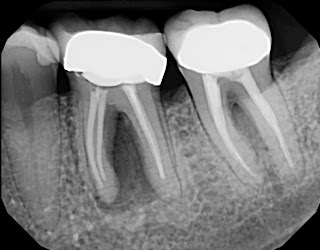 #18 has a sinus tract tracing to the furcation radiolucency and a clinical class 2 furcation.
#19 has a narrow isolated 8+mm probing depth along the MB with an obvious apical-lateral lesion extending up the root.
For more case reports and content, please follow Alpharetta Endodontics on Facebook. www.facebook.com/alpharettaendo
Posted by Justin M. Parente, DMD at 7:16 AM

Cases like these prove the necessity for our specialty to once and for all, state that treating molars without a microscope is BELOW the standard of care.

Thanks for the case. I think that it is intersting that even as an endodontist, we cannot always tell what is going on inside a tooth. Whether there is a perforation, missed canal or cracked root. Opening the tooth and examining under a microscope is often the only way to know with certainty, what is going on. Too often, dentists are condemning teeth as cracked or fractured and recommending an implant - when they simply do not know with certainty. Patients deserve more than a guess.

I couldn't agree more Jason and Robert! Microscopes should be the standard of care for all multirooted teeth. Usually I explain to retreat patients that examination continues into the treatment. I warn of risks of finding fractures and other possible outcomes.

I just closed up the access on a first visit for retreatment on #30 through a crown. Internally, I found a fracture extending well past midroot down the distal. Probing depths were 2-3mm and there was no radiographic signs of crestal bone loss or lateral ligament widening. The fracture was not the cause of the previous treatment's failure, and her symptoms will likely resolve, but I still recommended abandoning this course of treatment. A dental implant will be more predictable in the long term. I offered to complete the treatment if the patient was okay with a guarded prognosis. This is an example of the type of fracture that I would love to be able to see on CBCTs, but I'm not sure the technology is there yet. Any luck with those Jason?

From my experience, the ability to accurately diagnose cracks in the crown or root of the tooth with CBCT is still far from perfect. I still do not feel 100% about diagnosing a crack without visualizing. However, I have seen some cases where CBCT has identified a crack/fracture and simplified the diagnostics. But that is not everytime.

Thanks for this interesting post. Only just found this site and will be sure to bookmark it as all the posts I have read on it so far have been good.

involved posterior tooth is a strategic tooth and, if successfully treated, would most likely be lost... It is essential to carefully analyze all subjective information and objective .... associated with multirooted teeth, especially if the furcation area is involved. using microscopes should definitely be standard of care and professional judgment ... many thanks for bring up this subject.

The post is very informative.I like those pictures showing there.It helps to identify the right problem of our teeth.Thanks for sharing this.

It's really a interesting blog.And all the blog in this site is very informative and good.