Value and Limitations of CBCT in Endodontics-Case Report

For the longest time, I have been skeptical of the ability of the CBCT to detect vertical root fractures. Especially in previously treated teeth, where scatter radiation produces artifacts in the image. There has been research(mostly in vitro) supporting CBCT imaging for detecting fractures(Hassan 2009), and there is no doubt that the technology shows exciting promise for use in our field. This case demonstrates both the value and limitations of this exciting imaging system.
The patient first presented six months ago with new crowns on teeth #30 and #31. His symptoms were described as a spontaneous ache and a soreness to mastication that started with the new crowns and felt localized to #31. Diagnostic testing revealed percussion sensitivity and a lingering dull ache to cold on #31, as well as a mild soreness to bite forces on #30. The original root canal treatment and post on #30 were over 15 years old. A diagnosis of irreversible pulpitis was made for #31 and treatment was completed. The mild bite soreness on #30 was attributed to a heavy occlusion and/or some referred pain from #31. Here is our post op radiograph: 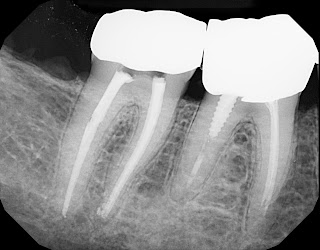 The patient reported an episode of severe spontaneous pain lasting one day in the area that started four days after the first visit for #31 and resolved prior to his second visit. This odd experience certainly raised some alarms for me, but when he returned, a new exam and series of diagnostic tests produced nothing of note.
At three months following treatment, the patient reported continued discomfort to mastication in the region. An exam and diagnostic testing produced some continued bite soreness on #30. A new periapical radiograph revealed a possible missed DB canal: 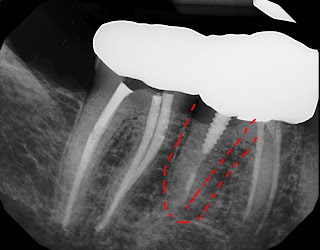 I also speculated on what appeared to be the early formation of a lateral radiolucency on the mesial root that could be the result of a vertical fracture: 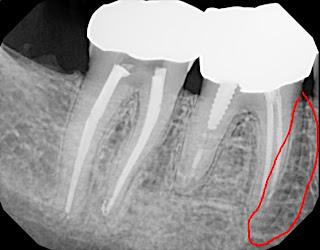 However, there were no significant probing depths, only mild symptoms, and no obvious signs of an apical radiolucency. At this point, to aid in our diagnosis, I recommended a CBCT. I reviewed the scan at length individually, and with a periodontist and with an expert from the company. I immediately confirmed the missed DB canal, but also noticed an obvious radiolucency associated with the distal root. What we could not find, independantly or together, was any sign of a fracture in the mesial root or of any lateral bone loss along the root. 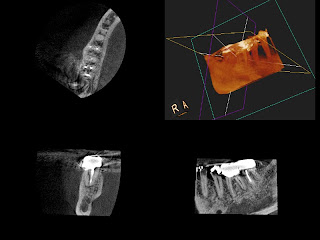 It's remarkable the accuracy with which we can pick up the missed DB canal and see the periapical radiolucency (PARL) that was not evident on the periapical radiographs above.
With the new diagnostic information, the decision was made to retreat #30. Of course, I still warned the patient about the risk of losing the tooth if a fracture is found in the root structure. Upon access, I was greeted with the familiar sight of purulent drainage pulsing up the distal with each heartbeat: 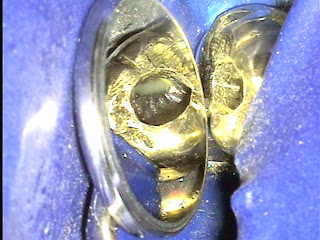 Below you can see the missed DB canal before and after post removal: 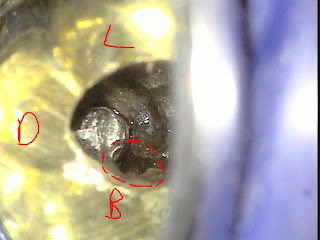 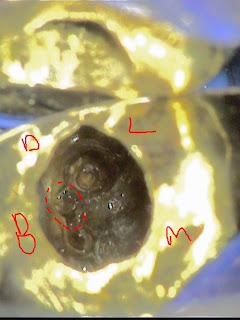 Unfortunately, upon cleaning up the mesial, two fractures were found leading to the MB canal. One along the mesial wall: 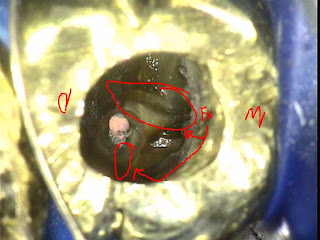 Another fracture was found along the MB wall: 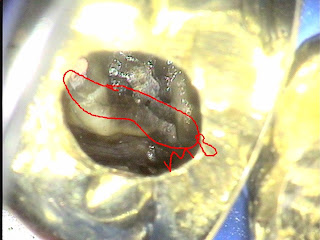 These large fractures probably form a wedge out of the MB root. Unfortunately, they severely compromise the prognosis of our treatment. I cleaned and disinfected the untreated DB canal before placing calcium hydroxide. I then closed the tooth and recommended extraction to the patient. Because of our diagnostic efforts involving a lengthy consult with clinical and radiographic images, the patient was understanding of his situation and appreciative that every effort was taken to diagnose his problem and save his tooth.
In this case, I had high hopes that the CBCT might confirm my suspicion of lateral bone loss around the mesial root. The CBCT was excellent, as it has been in the past, at confirming missed canals. However, it has still not demonstrated to early detect a vertical root fracture prior to an obvious clinical and periapical radiographic presentation.
If anyone has any questions or input, or has had different experiences with the CBCT. Please share them! Also, check out our office's facebook page at www.facebook.com/alpharettaendo where I post new cases regularly.
Posted by Justin M. Parente, DMD at 5:50 AM