Root Canals and Dental Implants: The Rest of the Story

At a recent local implant seminar, the clinician speaker, a representative of a leading implant manufacturer, reportedly told the audience that endodontic retreatment had a success rate of 46% in comparison to implant success rates at 98%. This speaker was terribly misinformed or choosing to misrepresent endodontic retreatment in an effort to promote implant placement on behalf of the implant manufacturer.

A recent blog post discussed a recent surge of misinformation regarding endodontic retreatment among the general population as well as the dental community. Anyone close to the dental industry is familiar with the massive marketing efforts of the implant manufacturers. Typically, these marketing efforts are in the form of clinician representatives speaking on behalf of the implant manufacturer in a continuing education presentation.

As endodontists, it is our responsibility to educate the public and our professional colleagues regarding this issue.

To see the outcomes evidence regarding retreatment, click here. (an accurate estimate of retreatment success is 80-85%)

That is not the only point that is misrepresented by implant marketers. There are some important points that are routinely overlooked when comparing endodontic and implant research. You will not hear these points at your next implant seminar.

Teeth and Implants are not the same which makes direct comparison difficult.
Success is defined differently.
In a systematic review of outcomes of single implants and endodontically treated teeth, Iqbal and Kim (2007) restricted their outcome measurement to survival. After reviewing 13 studies involving RCT, 55 studies with implants, and 1 study directly comparing the two, their meta-analysis found 94% survival of RCT and 96% survival of single implants at 5 years. Their study revealed no significant difference between the root canals and single implants.

After reviewing the root canal and implant outcomes, Zitzmann et. al. (2009) noted, "Due to similar outcomes of implant treatment and RCT, the decision to treat a tooth endodontically or replace it with an implant, must be based on factors other than anticipated treatment outcome alone." 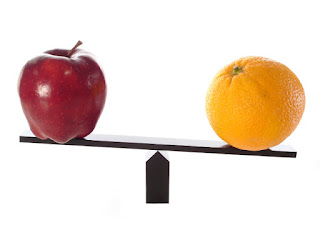 Comparing endodontic "success" with implant "survival" is like comparing apples and oranges. There are also a number of differences between endodontic and implant studies which may make proposed implant "success" rates artificially high. The following are a few examples.

Treatment Failure
These are two VERY different ways of determining statistical success. If you remove any early failure, your statistics at the end of the study are skewed and misleading.

Periodontal Ligament
To review the importance of the periodontal ligament, click here.


Restorative Failures
Patients who think that removing a tooth and replacing it with an implant will resolve all their dental problems are mis-informed.

These are two VERY different groups of patients. Exclusion of non-ideal patients in a study likely creates a higher "success" rate than would be seen in an average population.

These are two VERY different types of occlusal function. Once again, because teeth and implants are not the same, we ask and expect very different type of function from each group.

Not all research is equal. 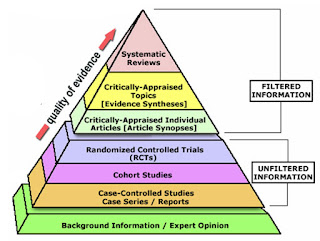 We all want to make sure that our treatment recommendations are in line with current scientific evidence. However, not all scientific studies provide the same level (quality) of evidence. Melnyk's hierachy of evidence ranks the quality of evidence based upon the type of study performed. For example, systematic review or randomized, controlled, double blind study has the highest level of evidence, while on the other hand, an expert opinion, is at the other end of the spectrum and provides the lowest level of evidence. In a systematic review of the endodontic literature, Torabinjad et. al. (2005) examined endodontic articles related to the success of endodontic treatment and found only 6 of 306 articles that were considered in the highest level (level 1 of 5) of evidence (randomized, clinical trials). 26 were considered level 2 (low quality randomized control trials, cohort studies), 5 were level 3 (case-controlled studies, systematic review of case-controlled studies), 82 were level 4 (low quality cohort studies, case-control studies, case series), and 178 were level 5 (case reports, epidemiological studies, expert opinion, literature reviews). This does not reflect well for evidence based treatment recommendations based upon this body of evidence. However, Torabinejad et. al. (2007), in another systematic review of outcome studies involving root canals and single implants found that the quality of endodontic studies higher than that of the implant studies, which were case series analysis 64% of the time. Erkert et. al. (2005) reported that the six major ADA-certified dental implant manufacturers, when asked for research validating their implant system, submitted evidence generally derived from level 4 case series studies, rather than controlled clinical trials or cohort studies.

As professionals, we are responsible for understanding and interpreting the scientific research in order to provide our patients with evidence based treatment recommendations. With much of the current continuing education provided/sponsored by the dental industry, we are tasked with the responsibility of deciphering what is marketing hype from what is valid, scientific, data.

In our practice we routinely recommend implant therapy for patients who have missing teeth or teeth that are non-restorable. If you are unsure regarding the restorability of a tooth, team up with your endodontist. He/She should have the technology, including microscopes and CBCT and experience to help make this important decision.

Email ThisBlogThis!Share to TwitterShare to FacebookShare to Pinterest
Labels: Implant

Nice post - I'm wondering how you held onto your seat when the statistic of 45% was thrown at the audience!? After 2 years of placing implants and training by endodontists - it is much easier to retain a tooth with endodontics rather than extract and place an implant (case dependent, obviously). Even in the easiest regions following extraction (especially following ridge preservation) - you just never know what the outcome may be after placing an implant. Prediabetic, weekend smoker, secret medications - there are so many factors that influence osseointegration that at some point, the literature seems to be almost overestimating success - ie - case selection and case removal...and..we're not even talking about the restorability of the implant.
Ashley

Thanks for your insights! I have found that endodontists are not particularly welcome to these type of seminars. Have you ever noticed how every implant seminar begins by asking if there are any endodontists in the audience?

Root canals and dental implants both are important and used in different area. But both are popular treatment in dentistry. These blog is very informative and helpful for all specially student and professional dentist. Thank you for this innovative and excellent effort.

The rest of the information about the dental related topics was great to read. Never been to such an informative blog before.

This is an excellent post! There is a lot of great information here on your blog- a lot of effort must have gone into it!

Great post! glad I came across this blog as it was very helpful as well as educational coming from general dentistry. We refer many patients out for implants and maybe with better education we can better help our patients in regards to implants as well as other specialty.
http://smoothdentalgroup.com/

It's a great post. I must appreciate the way you share you view. It is such a informative article about dental implant service and root canal Root canals and dental implants both are important and popular treatment regarding dental issues.

Quoting my houston dentist: "Dentistry is like any other profession. You meet dentists who will give you more options and will help you choose what is best for you. But you will also meet the dentist-cum-businessmen." Like the implant and the true teeth, though similar, you will still feel the difference. Great post!

I never really believed those supposed "clinicians" when they talk about dentures. New york statistics are far more consistent with the 85% success rate you pointed out at the start of your article, compared to what I always from those people (only around 40-45%).

I am so happy to read this. This is the kind of results that needs to be given and not the random misinformation that is at the other blogs. Many thanks for this precious guide.
invisalign oakville